How to troubleshoot high I/O wait time in Linux

I/O wait time is a metric used to measure the amount of time the CPU waits for disk I/O operations to complete. A high I/O wait time indicates an idle CPU and outstanding I/O requests—while it might not make a system unhealthy, it will limit the performance of the CPU.

The CPU’s I/O wait signifies that while no processes were in a runnable state, at least one I/O operation was in progress. In simple terms, I/O wait is the time spent by the CPU waiting for I/O completion.

I/O wait simply indicates the state of the CPU or CPU cores. High I/O wait means the CPU is outstanding on requests, but a further investigation is needed to confirm the source and effect.

High I/O wait forces the server to handle higher bandwidth to perform other computations while waiting on IO requests. I/O wait is a common metric to analyze system performance. When high I/O wait occurs frequently, it can negatively impact system performance by slowing down the system or causing issues such as low transaction throughput in the database and health degradation in applications and databases.

The two commands most commonly used to identify and troubleshoot I/O wait time in Linux are top and vmstat. These commands will display various CPU-level statistics, including I/O wait time.

The top command is the easiest and most widely used command for identifying I/O wait time in Linux. It displays a dynamic and real-time view of the system, CPU-level statistics, and a running list of processes managed by the kernel.

Running the top command will display an output similar to the one shown below: 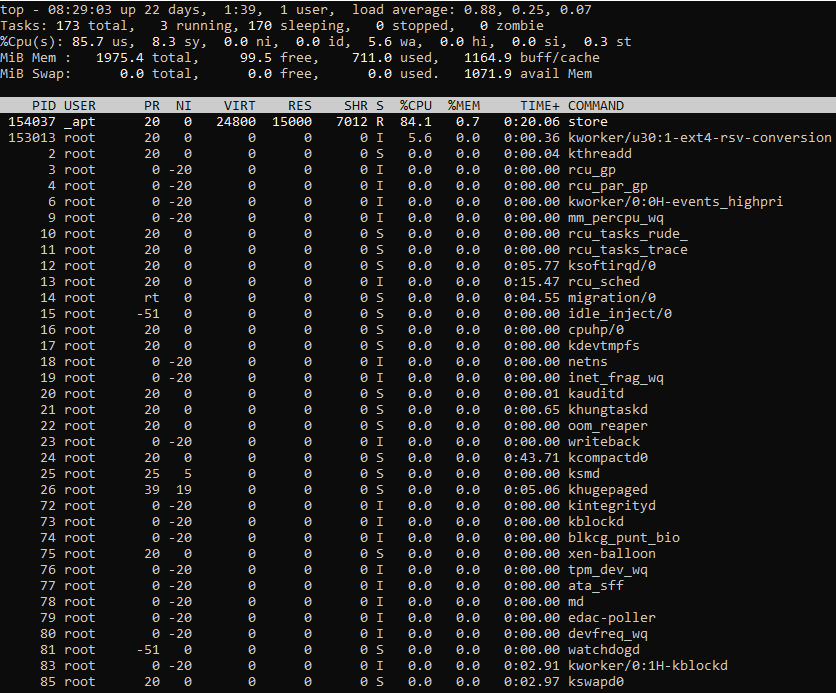 Fig. 1: Output of the top command

wa denotes the percentage of time the CPU was waiting for I/O to complete. If you are on a multi-core processor system, you can press 1 while the top command is running to get a breakdown of CPU usage per CPU.

The vmstat command is another performance monitoring tool provided by Linux. It delivers information about memory, processes, CPU, and more. By default, vmstat displays the statistics since the system’s last reboot. It can also show real-time statistics that update after a specified interval.

The two parameters commonly used with the vmstat command are:

Running the vmstat command will give you an output similar to the one shown below:

Fig. 2: Output of the vmstat command

The output is divided into four sections; we will focus on the CPU section. The columns in this section are similar to the %Cpu(s) line of the top command. Along with the I/O wait time (wa), we also get some additional information through the vmstat command, such as the total free memory or the number of blocks swapped to and from I/O. Having less free memory, for example, can lead to a high I/O wait time.

Once you’ve confirmed that you’re dealing with a high I/O wait time, the next step should be finding processes responsible for these I/O operations. One of the easiest and most frequently used commands for this is iotop.

Running the iotop command will give you an output similar to the one shown below: 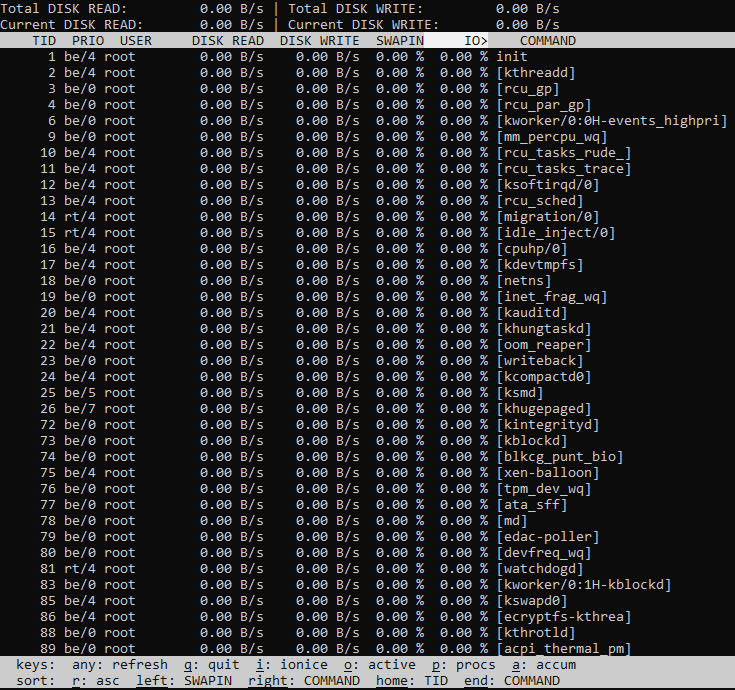 Fig. 3: Output of the iotop command

The first line contains the total read and write bandwidth of the disk. The next line displays the actual bandwidth of read and write operations done by the processes or threads currently doing I/O. The next section displays the running list of processes with data on their current disk I/O usage. The most important column here is the I/O column, which displays the percentage of time the process was doing I/O with respect to its total processing time. This particular list of processes is sorted in reverse order in this column.

One of the most commonly used options with this command is -o or -only. Run together with the command (iotop -o), it narrows the results down to a running list of processes that are actually doing I/O.

Identifying the disks being written by I/O

The top and vmstat commands tell us about the I/O wait time, and the iotop command helps us identify the processes doing I/O operations. One other important factor to consider is what disks are being used in these operations. The iostat command provides this information.

The iostat command displays a system’s input/output statistics. It generates device-level reports by monitoring the active time period in relation to average transfer rates. And like the top and vmstat commands, iostat also displays the CPU statistics.

The interval and count parameters here are similar to those of the vmstat command, and they’re used to show real-time updates infinitely or for specific counts only.

Fig. 4: Output of the iostat command

The first line above displays the average CPU statistics, including the I/O wait time. It represents the same value as that of wa in the top and vmstat commands. The next sections provide the following data for all devices and partitions: