How to fix high CPU usage

This article will explain the differences between these two important metrics, how to monitor CPU load with common commands, the impact of high CPU load, and how to bring it under control for improved system performance.

CPU utilization is the percentage of work the CPU is handling to manage tasks. CPU load, on the other hand, is a measurement of how many processes are being executed or waiting to be executed by the CPU.

Commands like uptime or top provide the value of CPU load averages—i.e., the average number of threads actively using or requesting to use CPU over the last 1, 5, and 15-minute periods. High load averages indicate an overloaded CPU with too many processes. For example, a CPU with a load average of 1 is running at full capacity, whereas a completely idle CPU has a load value of 0.

However, this metric scales with the CPU cores: The more cores installed on the system, the more tasks it can handle in parallel.

For example, for a CPU with 4 cores, the accumulated load average will be 4, since each core can handle a load value of 1. In this scenario, even if one of the cores is running at 100% capacity, the CPU would only be loaded with one quarter of its potential load.

Now, if the load becomes greater than the number of cores installed, then the processes would start to queue up to use the CPU.

As noted above, CPU load is averaged over the previous 1, 5, and 15 minute periods. But there are other metrics that also help us identify the CPU load, such as:

Generally, a high CPU load doesn't negatively impact a system’s performance, as long as it isn’t a long-term occurrence. But running a CPU at 100% capacity for extended periods can have mild to severe impacts on system performance.

A few possible issues are listed below:

The next section will cover some of the commands that make it easy to monitor the CPU load averages.

The top command displays the dynamic statistics of a running Linux system in real time. It’s one of the most-used commands for monitoring system performance. The first half of the output of the top command contains important system metrics, while the second part displays statistics about a self-updating list of processes that are currently being managed by the Linux kernel.

Running the top command will create an output similar to the one seen in the figure below: 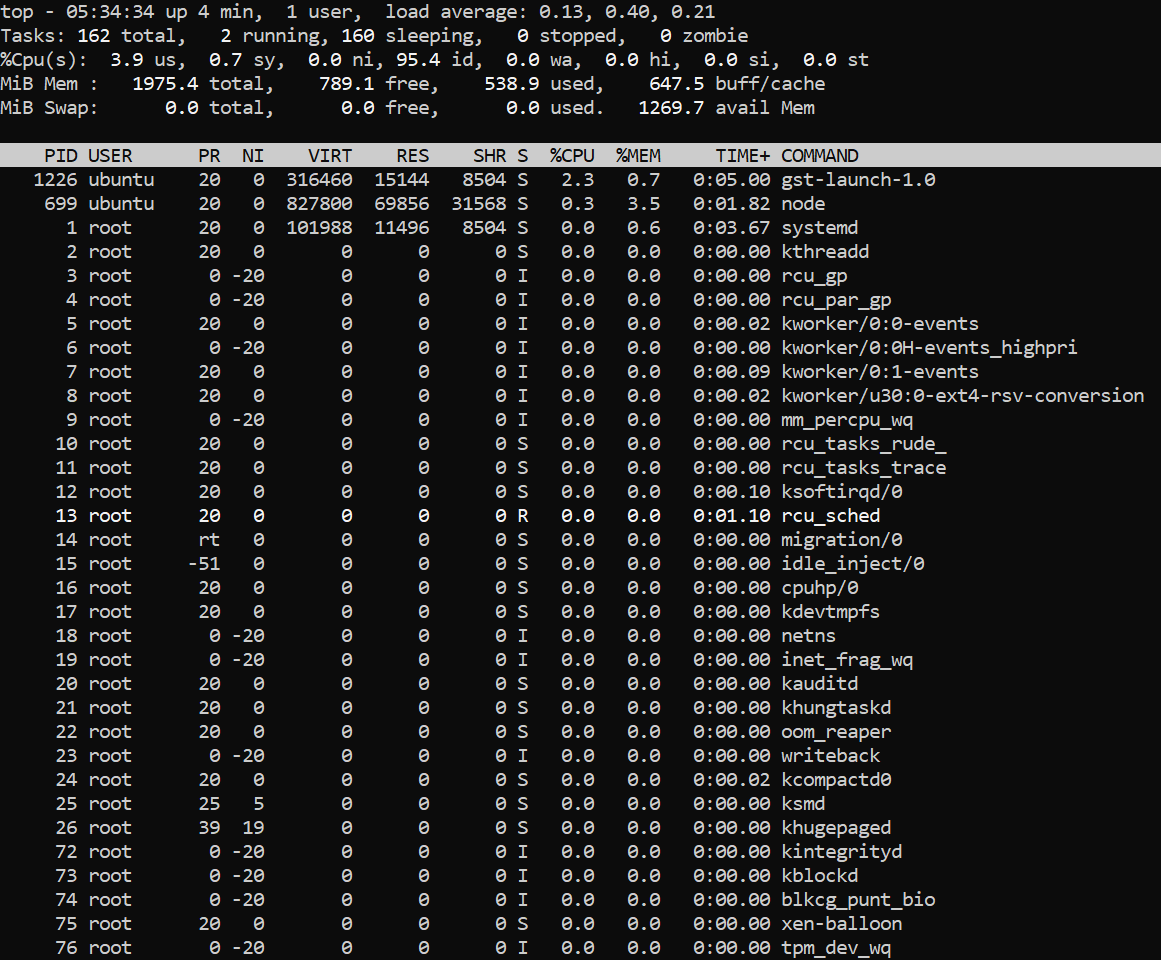 Fig 1: Output of the top command

The first line of this output displays the uptime, the total number of active users logged into the system, and the load averages of the CPU for the last 1, 5, and 15 minute intervals.

The uptime command is also useful for viewing the load average of the system. This command displays the current system time, the uptime of the machine, the number of users currently logged into the system, and the load averages for the last 1, 5 and 15-minute durations.

Running the uptime command will generate an output similar to the one shown below:

Fig 2: Output of the uptime command

The ps command is a flexible and widely used tool for identifying the processes running in the system and the number of resources they’re using to run. This command can show different outputs according to various options.

Running the ps command will generate an output like the one shown below:

Fig 3: Output of the ps command

This output displays basic information about the processes running, but it can be customized with options provided by the ps command to yield more details.

For example, we can view and sort which processes are using the most CPU by running the following command:

This will result in an output like the one shown below:

Fig 4: The top 10 most CPU-consuming processes

The ps command doesn’t display the load averages of the system, instead, it’s used to troubleshoot the cause and find the processes that are causing the high CPU load. For example, if a process is using 100% of the CPU, the other processes will have to wait for the CPU and the load on the CPU will increase.

This command also helps to identify the processes that are being spawned repetitively or are in a zombie state.

Below are some common fixes to reduce high CPU load:

The CPU load is an important metric that needs to be monitored regularly to ensure that the system is running smoothly. This metric is generally measured in load averages, but there are some other measurements that indicate the amount of load on the CPU.

Luckily, there are a number of useful commands that can help identify and monitor the CPU load. The top and uptime commands help to directly monitor the load averages of the CPU, while the ps command is used to identify the processes that are causing the high CPU load.

High CPU load can be an indicator of several problems, and there are various common fixes available to reduce the high load and optimize CPU performance.

Was this article helpful?
Sorry to hear that. Let us know how we can improve the article.
Thanks for taking the time to share your feedback. We'll use your feedback to improve our articles.
Previous What is inode usage, and how can we reduce it?
Next Understanding CPU utilization