High context switch and interrupt rates: How to diagnose and fix in Linux

How can multiple processes, such as video players or Google Chrome, run simultaneously on a single core computer? The answer is a mechanism called context switching that enables the operating system to multitask and allow multiple processes to share a single CPU.

However, context switching can affect system performance. To diagnose and fix high context switch and interrupt rates in Linux, we should first understand these terms and how they can affect your system.

What is context switching?

Context switching is the process of storing the current state of the CPU in the process control block (a data structure managed by Linux) for the task it’s working on so that this saved state can be reloaded each time that task is resumed. Context switches make it possible for multiple processes to share a single CPU, and as such, they’re part of the essential functionality of a multitasking operating system.

What is the interrupt rate?

Checking context switch and interrupt rates in your system

Let’s start with vmstat, a built-in command line tool that collects information about memory, system processes, paging, interrupts, I/O, or CPU scheduling. For example, we can use it to check for the monitoring metrics of our system, with an interval time of 5 seconds, and only capturing 10 times:

Here, the data memory is in kilobytes (KB), and the CPU usage is given in percentage.

Alternatively, if we want to display the active and inactive memory of our system in megabytes, we can use

Fig. 2: vmstat shows the active and inactive memory in megabytes

System administrators often use the pidstat tool to monitor tasks currently managed by the Linux kernel.

For example, to show all tasks, we can run 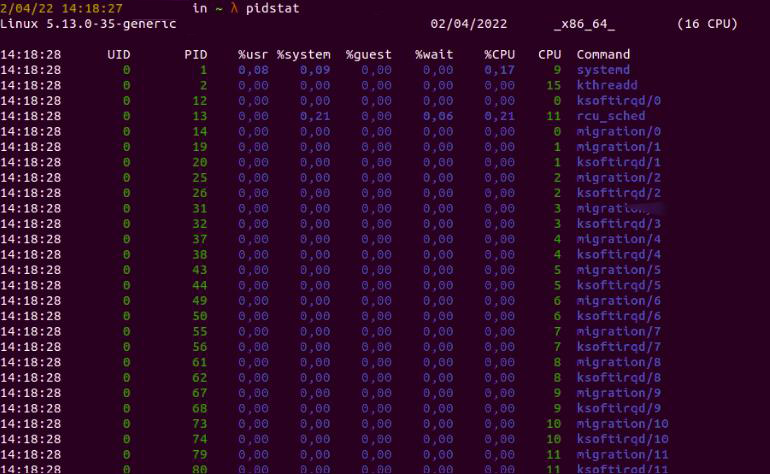 Fig. 3: Results for the pidstat command

If we only want to display statistics about the Postgres database process, we can run

Alternatively, we might want to get the statistics about a process by its ID:

The perf command shows combinations of performance counters, such as performance metrics. In addition, it can inject small scripts into the kernel to process this data in real time.

Then we can get counter statistics for the entire system for five seconds by using the perf command.

We can also profile a certain process by its ID for 10 seconds, at 99 hertz. Sampling at a higher frequency (like 999 or 9999) will produce a lot of overhead results. In addition, sampling at an odd number rate (like 99 instead of 100) will prevent lockstep sampling issues (profiling samples at the same frequency and getting incorrect sampling results).

For a more in-depth demonstration, we’ll use a dummy application in the Go programming language—one that has a high context switch rate problem.

The application code is implemented as:

Before we check for performance issues in our application, we should first close any running processes in the server that we don’t need so that the performance monitoring process will be more efficient.

To trigger the application, we’ll start by running this command:

Next, we’ll check the context switch rate by running vmstat. (Since vmstat is a lightweight command, we can be confident that performance monitoring will not be affected by running it.)

We’re looking at 201,516 context switches, and the interrupt rate is 65,259. These unusual numbers point to a related performance issue in our application.

Identifying the root cause

If we take a closer look at our code, we’ll see that we’re using goroutine to have the application run faster. However, due to the nature of the application—it only retrieves data from a small csv file—we don’t need to take the concurrency approach with goroutines. In fact, this concurrency approach is the root cause of our high context switch rate.

When iterating the for loop in goroutine, the main goroutine will have to check for existing iterators in other routines so that we only loop in 1,000,000 times.

As a result, the main goroutine will need to check in different goroutines continuously, and this will lead to increased context switching.

This issue can be solved by removing goroutines. Instead of using multiple goroutines, we will only execute the loop in one main routine. 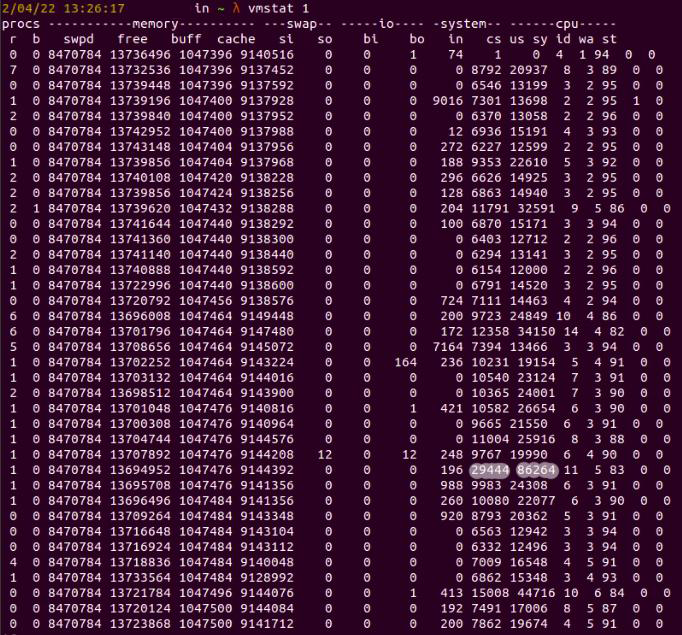 There could be many reasons behind high context switch and interrupt rates in Linux. Regardless of the root cause, increased context switching is a sure sign that our system is having performance issues that we should immediately update.

This might not be an easy task at first, since it requires knowledge of how a Linux server works as well as how applications are implemented in Linux. Now that you understand high context switching and interrupt rates in Linux servers, and after learning the steps to take to address the issue, you’ll be able to troubleshoot with confidence.

Was this article helpful?
Sorry to hear that. Let us know how we can improve the article.
Thanks for taking the time to share your feedback. We'll use your feedback to improve our articles.
Previous Troubleshooting Linux network performance issues